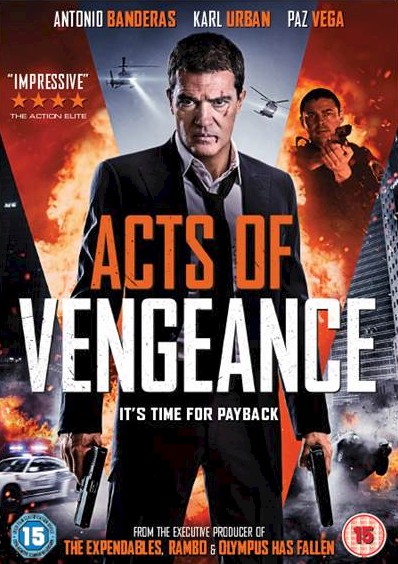 Frank Valera (Banderas) is a high-powered corporate defence lawyer who lives for his wife and daughter, but unfortunately has little time for them.

Typically, he’s stuck at the office, then in downpour-stalled traffic long enough to miss his child’s talent-show recital. Remorse turns to concern when the duo don’t return home that night. Later, police lead him to their slain bodies in a storm drain, victims of a mysterious crime.

Valera then takes the law into his own hands to discover the truth, and get revenge.  Starring Antonio Banderas (The Mask of Zorro, The Skin I Live In, Desparado) and Karl Urban (Star Trek, The Lord of the Rings, The Bourne Supremacy) ACTS OF VENGEANCE proves that payback really does speak louder than words.